[FONT=arial]Above & Beyond announce the Full line-up 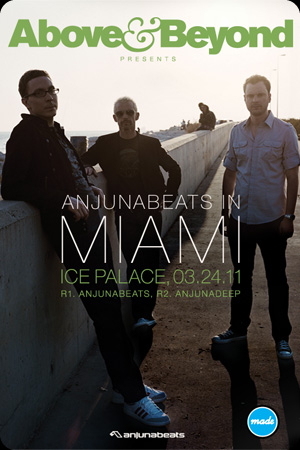 Inhabiting the two rooms of the massive Ice Palace venue for a huge all-star event, Above & Beyond’s Anjunabeats In Miami party is their biggest gig in the city to date and features a transatlantic array of the most forward-thinking names in trance and progressive music.

Following two years of sell-out parties at Karu & Y and with early bird tickets selling out in just a few days, the Ice Palace spectacular looks set to be a cornerstone event for any electronic music fan visiting Miami during this year’s party week.

Top of the bill will be the headline set from Above & Beyond themselves. With anticipation around their forthcoming Group Therapy album building and lead single “Sun & Moon” recently unveiled, Above & Beyond’s set promises to be everything their many fans would hope for – an exclusive showcase of new material and unreleased anthems from their legendary Anjunabeats imprint.

With their biggest Miami party yet, Above & Beyond are taking things to the next level, something they have been making a habit of lately. Just last December, the UK-based trio celebrated the 350 th episode of their Trance Around The World show with a marathon 7-hour broadcast from L.A.’s Hollywood Palladium. Not only did the event sell out in an unprecedented 24 hours, but it also went on to become the world’s number one trending topic on Twitter.

Such fanaticism and fervour follows Above & Beyond wherever they go. Each week over 30 million people eagerly tune in to their Trance Around The World show, fans regularly send in tattoos of Anjunabeats logos or Above & Beyond song lyrics and their DJ sets inspire scenes of explosive euphoria the world over.

Anjunabeats In Miami on March 24th will be Above & Beyond’s ONLY appearance of Miami party week. Stay tuned for more details on the show including next week’s announcement of the Anjunadeep room line-up. To add to the excitement, Sirius XM Radio will be broadcasting live from the main room all night, via its Area channel.

Early bird tickets have sold out but general admission tickets are on sale now!